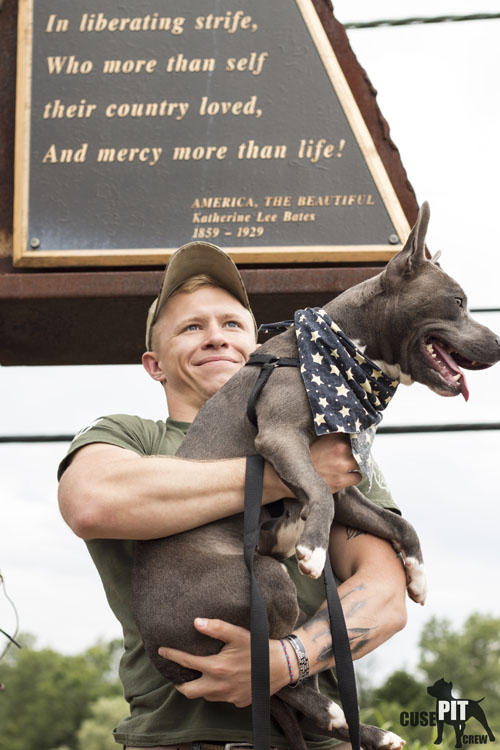 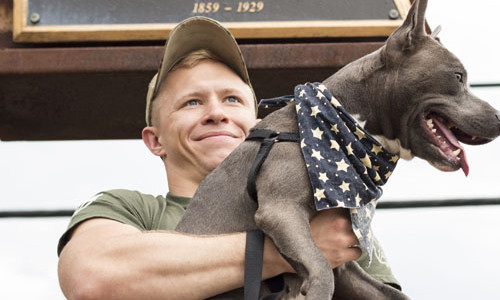 July 3, 2015 – My inspiration for this photo shoot featuring CNY Veterans and adoptable pit bulls came from two of my best friends…the two “rocks” in my life: Mike, my boyfriend and combat Veteran; and Rocky, my rescued pit bull. This 4th of July weekend, we must remember that the pit bull has, and always will be, “America’s Dog” and our Veterans and Active Duty Military men and women will forever be our protectors. Together, they are “America’s Best Friend.”

Click Here to View All the Photos of CNY Veterans + Pit Bulls.

This isn’t a story of how I fell in love with my best friend. It’s the story of how one veteran helped change the way I love my pit bull.

I met Mike on a June evening in Clinton Square. I quickly learned that he was an active duty soldier and had just returned from a tour in Afghanistan. Through his charm and humor, we quickly became friends – and eventually, best friends.

My two rocks: Mike and Rocky

Mike knew about Cuse Pit Crew, the organization I founded because of my passion for pit bulls. So when the time came to meet my “three boys,” also known as Mickey (the beagle), Otis (the boxer), and Rocky (the pit bull), Mike realized things were getting more serious.

I told Mike how I adopted Rocky after he was with me as a foster dog for a year. He was a middle aged black pit bull living in the shelter after his owner went to prison. He was selective with the dogs he liked and was pretty much a loner. No one was interested in adopting Rocky, so one April day he officially became mine.

Rocky was just like his name, a rock. He showed very little emotion toward me and his canine siblings, and he was perfectly content with that. Of all the pit bulls I had met in the shelters over the years, my pit bull was the opposite of the wiggly, goofy, affectionate dogs we have come to know as pit bulls. Rocky was more reserved – stoic and still.

Mike met my dogs and acted like he had known them for years. I like that about him. I could tell Mike was genuinely excited to be around my boys. I could also tell that after a tour in Afghanistan he especially loved being around the dogs. Over there, Mike and his platoon experienced war and loss. I’ve gotten to 34 and have figured out a few things in life and one of them is this: dogs make you feel good. They make you feel better than the day before. This is even more true if your “day before” was fighting in a combat zone.

As Mike spent more time with Rocky, I started to see something magical happen. It was evident that not only was I falling in love with Mike, but my dogs were, too. Rocky began to change. The change was subtle, but it was there. And it was because of Mike, who’s so engaging and warm, you can’t help but smile.

Well, Mike’s personality made Rocky smile. Literally, Rocky’s mouth opened loosely, his eyes slightly closed and the corners of his lips gently turned up. I finally saw the pit bull smile I’d seen on so many other dogs, but never Rocky. But here he was, smiling. And playing…playing like a puppy! It was one of most amazing things I have ever witnessed.

Since that day Rocky smiled, I have seen him continue to change. He acts goofy and is lighter in his step. In the five years I had Rocky prior to Mike, Rocky never would lay close to me. His sense of self was being sure he was closest to the front door so that I was protected at all times. Today, he lies on me and with all 75 pounds of him. I never complain once.

I thank Mike all the time for my “new Rocky.” And he just shrugs it off, as if it were no big deal. As if it were effortless. So many veterans living and working with us, ask nothing from us, not even gratitude. But today, at least from me, they’re going to get a heartfelt thank you.

Our Veterans have served. And now they’re home, still doing amazing things. Our Veterans stood by our side: even across the ocean, in the desert, and on the battle field. At home, they’re continuing to make life better. They’re improving our community. They’re wonderful parents, friends, and neighbors. And most importantly, they’re making us smile. And they’re making tails wag. They are truly America’s best friend.